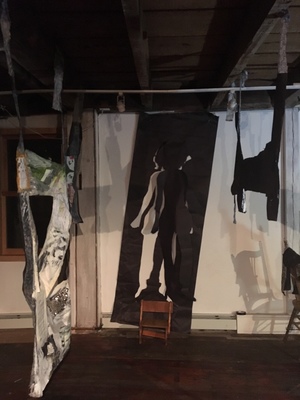 2 weeks in June, 2018
@ the Prattsville Art Center in Prattsville, NY

A lot of performance documentation/video posted @ Ravelin too!

opens April 27th 7-9PM
and is up through May 27th
1004 Metropolitan Ave. near Morgan Ave. in Brooklyn
Safe Gallery hours: 12-6PM Sat./Sun. - be in touch if you'd like to meet @ the show outside of regular hours ;)
Release of Oasis
Link 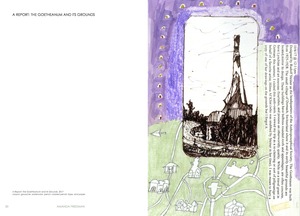 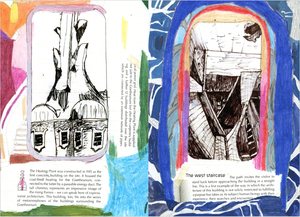 I contributed a writing/drawing piece on the Goetheanum to Oasis, the 5th issue of Prospect, a landscape studies journal edited by Nancy Seaton and Marie Warsh.
Shimizu Brand photo booth at Nada Miami
Link

I have a paper moon artwork as prop in Shimizu Brand's artwork/prop filled photo booth install at the fair!

17 Essex Street, NYC, NY
First Ever and the Only East Hampton Biennial

Sometime in April through Late May - Spirited by John-Elio Reitman

NEW SPRING is upon us! It is unclear when it started or when it will stop. Early indicators for its arrival were the thaw, bird song, the emergence of crocus flowers, outdoor café seating, the flow of tree sap.

How much longer before it all goes to shit?

“Because of the extreme cold last year, the season only lasted three to four weeks. This year, if the weather pattern holds, [we] are hoping that the season will last seven or eight weeks. It is a pretty decent year. If we were growing what would kill us is seven days of 60 to 70 degree weather.”

I saw the signs on the Taconic State Parkway, I saw the sign for EXIT 26: CROWN MAPLE / MADAVA FARMS, NEXT RIGHT. I followed the sign. I drove past acres of maple trees and ~250 miles of installed maple tubing, sucking sap directly to the processing facility. The farm, the gift shop, the café and the facility were not open for visitors that day. I walked around the woods and the perimeters of the buildings. The tubing looked not unlike the electricity wires running along the side of the dirt road that leads up the side of the property.

Ghost is located in the woods, accessible by portal; the astral plane; the internet. Ghost can be animated with electricity by a generator (Honda EU2000i). This generator emits carbon monoxide gas. Odourless, colourless, tasteless, it is harmful and dangerous to you and I. It is difficult to detect, like the subtle changes in the seasons. The barn was falling over, but now it is not. Ghost is hosted by Colin Alexander.  ghostfeaturefilm.com 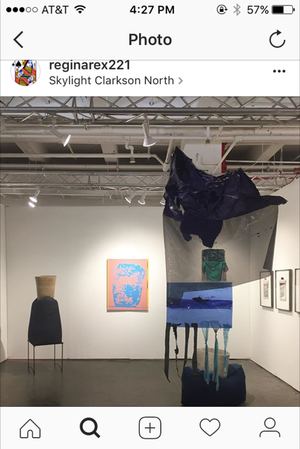 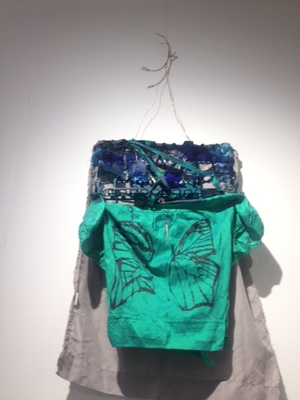 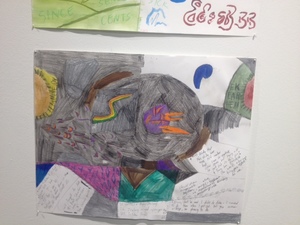 Throughout Amanda Friedman's show at the MILLER, she has been working with Lauren Anderson in the gallery at night. Together, they made a video from within and with the space of the exhibition, playing with lights and reflections. What they have generated activates the installation, and pushes Friedman's idea of time-based painting.

Anderson and Friedman have also invited several artists they are in conversation with to screen their short videos. The screening will begin at 5:30pm and features: Lauren Anderson, Amanda Friedman, Josh Brand, Heather Anne Halpert, Kate Ruggeri, and Alina Tenser.

SITUATIONS ON POWER AND PEACE:
Link
AMANDA FRIEDMAN, JENNIE JIEUN LEE, JOYCE FRIZELL, LEE MAIDA, MARY MANNING, MONIQUE MOUTON, RENEE DELOSH
JAN 7 - 29, 2017OPENING SATURDAY JAN 7TH6 - 9PM "Power is not brute force and money; power is in your spirit. Power is in your soul. It is what your ancestors, your old people gave you. Power is in the earth; it is in your relationship to the earth."  - Winona LaDuke*Above image: Thoughtform: Good Luck 1 by Amanda Friedman  127 HENRY STREET   NEW YORK, NY 10002
Jane, Grace, and Emily
Link

installed through Jan. 22nd
Lauren Anderson and I will activate the painting installation through the show's duration. The gallery will host a screening of the animation we make along with other shorts on Sat., Jan. 14th.
text for the show:

When I make up characters it reminds me that I’m multi-layered, scattered, many. When I give a thing a name or call it part of my making-vocabulary, it becomes distinct: a working component. One such being is the Lost Keychain I’ve featured in my last three plays.

A character is an eccentric; this feels like a suitable definition to have in the room. And there is that thing within people, good or bad character. Where and how does that work? It is relative and when articulated can only be semi-trusted.

Jane, Grace, and Emily are three characters in Lynne Tillman’s first novel Haunted Houses. Nora recommended it to me and I finished it the day this show was confirmed. It tells the stories of these three women growing up. Normal, nowhere (New York), cold and chewy. My grandma just stopped being able to walk. But at ninety-eight, she says she is ready. Re:her past, things were not good.

This show subscribes to non-linear living time. It is an exercise in time-based painting. The lights are seasonal - if anything, it is dark early now, often and overhead.

Housed in painting, I work with diverse materials: paint, canvas, found objects, paper, lighting gels, colored pencil, cardboard, wire. The pieces in this show commune to create a total-space - one looks through a plastic lighting gel, to a scene in a rectangle depicting a cardboard cutout. Parts talk to each other; it is a team effort.

Amanda Friedman will be uniquely activating one of Rosemary Mayer’s text pieces in “Turn Again”. The artists Phoebe d'Heurle, Brie Ruais, Linnea Vedder-Shults and Lizzie Wright will be performing in this piece. 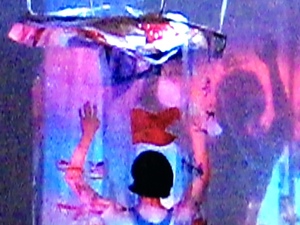 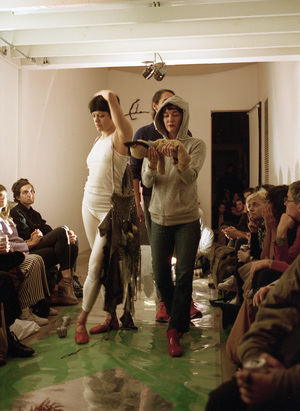 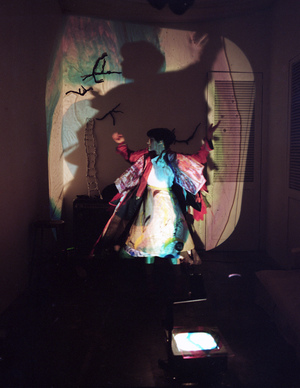 I Lost Something In The Hills Or A Painting Of Blue Roses, A play
Link

write up in New City 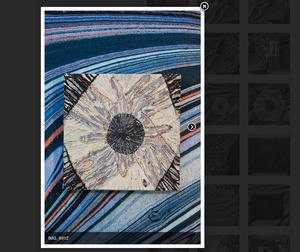 A new artist book made in collaboration w/ Ariel Dill & Denise Schatz will be released during the NY Art Book Fair, Sept. 26-28! Check it out at Miniature Garden in the small press dome.

A conversation to locate the body in work.

Carousel is an exhibition experiment. Regular one-night-only ”openings” will showcase an artist and their use of a mechanical slide projector. CAROUSEL is organized by artists Gabriela Salazar and Mary Choueiter. Contact at info@carouselproject.com. Locations TBA.

image below: Kayla singing in front of painting made for performance, Spotlight Poetry Reading and Songs Rachel, Sophy, Kayla 2/27/14 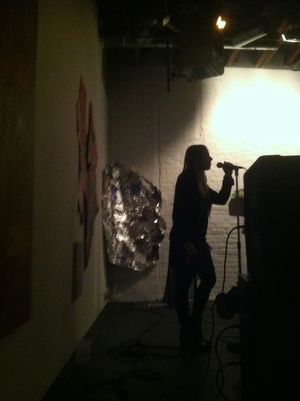 opens Feb. 21st and on view through March 23rd

THE FOURTH WALL @ The Willows
Link 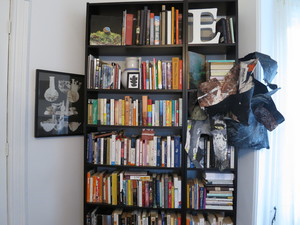 artwork above installed in bookshelf during exhibit:

A CAMPFIRE LAUNCH: BECAUSE NOTHING ENDS @ White Columns
Link

Firelighting and performances starting at 7 PM 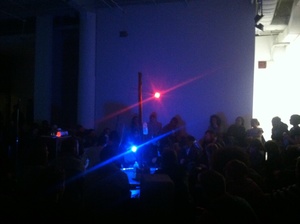 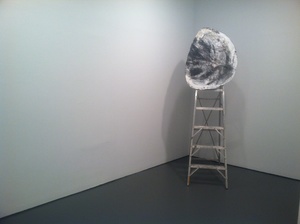 Because Nothing Ends @ PS1/MOMA
Link 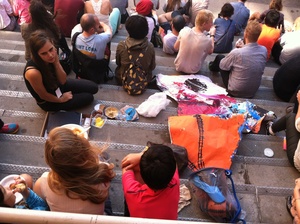 image: Elizabeth and painting (TF: Studio) sitting outside on PS1 steps during our picnic book signing

Because Nothing Ends, published by peradam - upcoming release!
Link

Because Nothing Ends is a double sided flip book consisting of uncut footage taken at Rockaway Beach this June. In the pages, Friedman\'s painting \"Thought-form: Good Luck II\" flies into the sky and dies out at sea. She did her best to collect all of the paper and pigment from the waves.

was in berlin for 2 weeks doing ACSA @ Autocenter
Link

and a B. friedman ;)that i just noticed. you just keep doing things you know. you, me and things.

for part 2 of interview: here

interview about my work featured on painters\' table
Link

\"There\'s Amanda Friedman, whose craggy-shaped paintings on paper, shown in painter Eli Ping’s tiny basement gallery, were a highlight of the past year.\"

an interview I did about my work + images in forgetgoodzine
Link

at The Shandaken Project in upstate NY!
Link

BULL AND RAM: Studio visit with Amanda B. Friedman
Link

The Art Book Club at Fleisher/Ollman Saturday March 31 at 3pm. The Art Book Club—a group of artists based in New York City that meets regularly to discuss an assigned reading—invites the public to take part in a conversation about Katy Siegel's book, Since '45: America and the Making of Contemporary Art.

Elizabeth Hirsch and I made a zine together that was on sale at The Art Book Club booth.

Parlour No. 11: When All Through the House
Link
Giftland X: Happy House
Link